For example, as I read through Gav Thorpe's Eldar books I'm kind of clutching to my old interpretation of the Eldar, how the Path works, questions of technology, and so on.

I take you mean "The path" series by Gav which is excellent, the Pheonix Lord books are also worth reading. The Ynnari books, although well written and did flesh out Eldar a bit felt rushed towards their end, and I really didn't like that gem of Khaine thing (phrased in a way to avoid spoilers) as it invalidates the point of the young king.

Yeah I got to agree, for me the old Necron's made certain amount of sense given their lore, bent on the destruction of all life, now they feel more like a chaotic neutral element.

The lore feels like we are a few books away from Imperium, Tau , Eldar and Necrons holding hands as they slap chaos back into the warp, then route orks into helping them clear the Nids off.
2

« Last post by Sir_Godspeed on Yesterday at 10:20:32 PM »
I kinda prefer the older, unknown, horror-inspired Necrons. They don't exactly make for great POV characters and are probably not as interesting to play as, but I really liked the idea of merging AI and replicated minds and the potential that lay there, plus making them kinda untouchable on a wider, strategic level (kinda how they come off in the Battlefleet Gothic tabletop version).

The new version does have a lot going for it with active personalities and characters, so fair enough. They are horribly overdesigned though. The cables everywhere is too much, as is, imho, all the gilding/detailing.

EDIT: I also prefer the version of the Council of Nikaea and the formation of the Inquisition that existed before HH novels covered those things. The version of the Council in the novels has the Emperor ban ALL psykers in the Legions, not just sorcery, which is indescribeably dumb (astropaths, navigators, librarians, hello?), and the version of the Inquisition forming is one of those cases where they took something that was described as forming gradually, over time, by many different groups coalescing through complex interaction, and replaced it with "one day someone started the inquisition". I get why the latter might make for better storytelling, but it's not my preferred form of worldbuilding.

I do so prefer painting metal minis.

Yeah, I think with that era metal, they raised the detail out more and sunk the lines a bit deeper than they current do on plastics. It gives then a chunkier feel, but easier to paint.

Looking good so far, keep it up

« Last post by Irisado on Yesterday at 02:18:58 PM »
Harlequins are a rare unit that are rarely seen in Craftworld armies.  This one is actually still holds true, but it stopped being emphasised sufficiently in the lore quite some time ago.
5

« Last post by Dread on Yesterday at 01:32:33 PM »
At least youre getting to play 40k. Were stuck in killteam mode which is okay but you know. Also getting my vamps assembled for AoS and got the little rule book today. Gonna push to get playing that.

Love the spiders. I hope they will be next on the plastics list.
6

Magnus did nothing wrong.
7

Well, a bunch of my reinforcements arrived and I`ve got a fair bit of them built and primed. Thought I would start off with my warp spiders, which were metal of course, and I do so prefer painting metal minis. 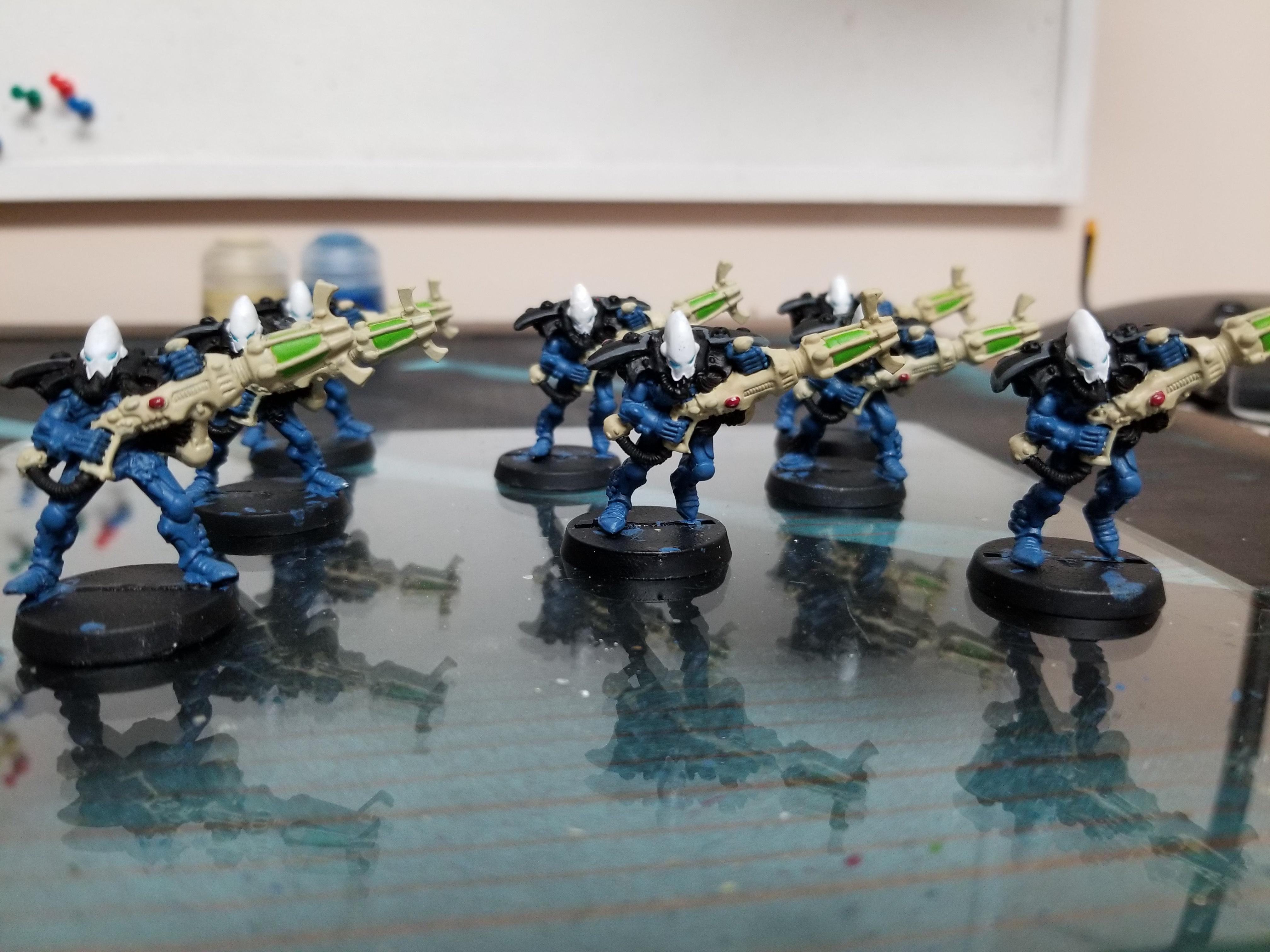 I`ve got them base coated now without any washes or highlights, which are next on the docket.

No new games to report unfortunately. Tried as I might this week to get a game scheduled, most people were busy prepping their armies for the tournament in Toronto this weekend. Hopefully I`ll turn my luck around on that front in the weeks to come.
8

Bad Behavior has blocked 2862 access attempts in the last 7 days.