« Last post by Myen'Tal on Yesterday at 10:50:02 PM »
​So, I am trying to get back into the swing of making written battle-reports. This'll be a summarized version of the game, which can be considered as a warm-up

I got my Lumineth on the table for the first time! Against the White Dwarf Battalion for the Gloomspite Gitz known as the Jawz of Mork! If anyone isn't familiar with this battalion, it enhances squigs into a ferocious stampede! Also it changes the moonshrine so that squigs can get resurrected at half strength instead of only moonclan units.

The Gitz take first turn and seize all the objectives across the board. The Boingrotz, Squig Boss leader, and Skagrott slink to the very back of their deployment zone in hopes to avoid my archers, which they will. The Squig herd advances on the right flank and takes one of the secondary objectives, and a unit of stabbas takes the center non-primary objective. The Mangler Squig roles up onto the primary and the Squig Hoppers bounce past it and straight into a Warden Phalanx.

Wardens pop their aetherquartz for +1 save. Moonfire flask takes out a squig hopper. The Hoppers absolutely flatten 16 Wardens... leaving four. That had me sweating a bit lol. The Wardens do strike back and kill a couple of hoppers.

The Lumineth march forward in formation to counter attack. Stonemage remains in place and unleashes an Assault of Stone on the Hoppers, who have a 6+ save... 8 mortal wounds! Over half of the Hoppers just got smashed underneath some rocks! The Archers make their presence known, hosing down a good number of squigs in the squig herd, and taking off about 8-9 wounds off the Mangler Squig.

All of my spells go off beside Ethereal protection.

The Dawnriders surge forward on either flank and crash into their respective targets with some good charges. The Squig Herd is trampled underfoot, the rest flee from battleshock and kill a knight on the way out thanks to their frenzied flight.

The Knights assaulting the mangler squig whittle the chained creatures down to one wound with their sunmetal lances alone... guardian sword and hooves fail to do anymore. 😑. Now that the Mangler is on one wound, it manages to wipe out an entire unit of ten dawnriders in one chaotic, gore-splattered round of combat.

This changed the outlook of the game completely... if I could have done just one more wound, I'd have an entire unit of dawnriders still in the fight and the primary objective under control. And now there is a very angry Mangler on the rampage!

If I had won turn 2 priority, I knew I'd have a good chance to recover and counter-attack back into a position of strength...

Of course, gloomspite win the priority. To make matters worse, the primary objective stays where it is, on the flank that is pretty much decimated at this point.

The mangler would go on to crash into the sentinels on my left flank and chew up 15 of them. The last five do strike down the mangler with the glorious light of hysh in their eyes. The Stonemage whittles down the rest of the Squig Hoppers when she joins the fray.

The remaining Warden unit charged into the center objective under a constant hail of supporting fire from the other sentinel unit marching steadily behind them.

So, I concede and call it good game to my opponent!

I was actually surprised at how quickly it came.  I placed the order late on Wednesday night; received the email on Thursday saying it was being shipped, and to expect it in 4 - 5 days; then it arrived around 1600 on Friday.

That's the benefit of having a north American warehouse for forgeworld! They come as fast as any other gw order! (Very fast!)
4

« Last post by Grand Master Lomandalis on September 26, 2020, 12:05:42 PM »
I was actually surprised at how quickly it came.  I placed the order late on Wednesday night; received the email on Thursday saying it was being shipped, and to expect it in 4 - 5 days; then it arrived around 1600 on Friday.
5 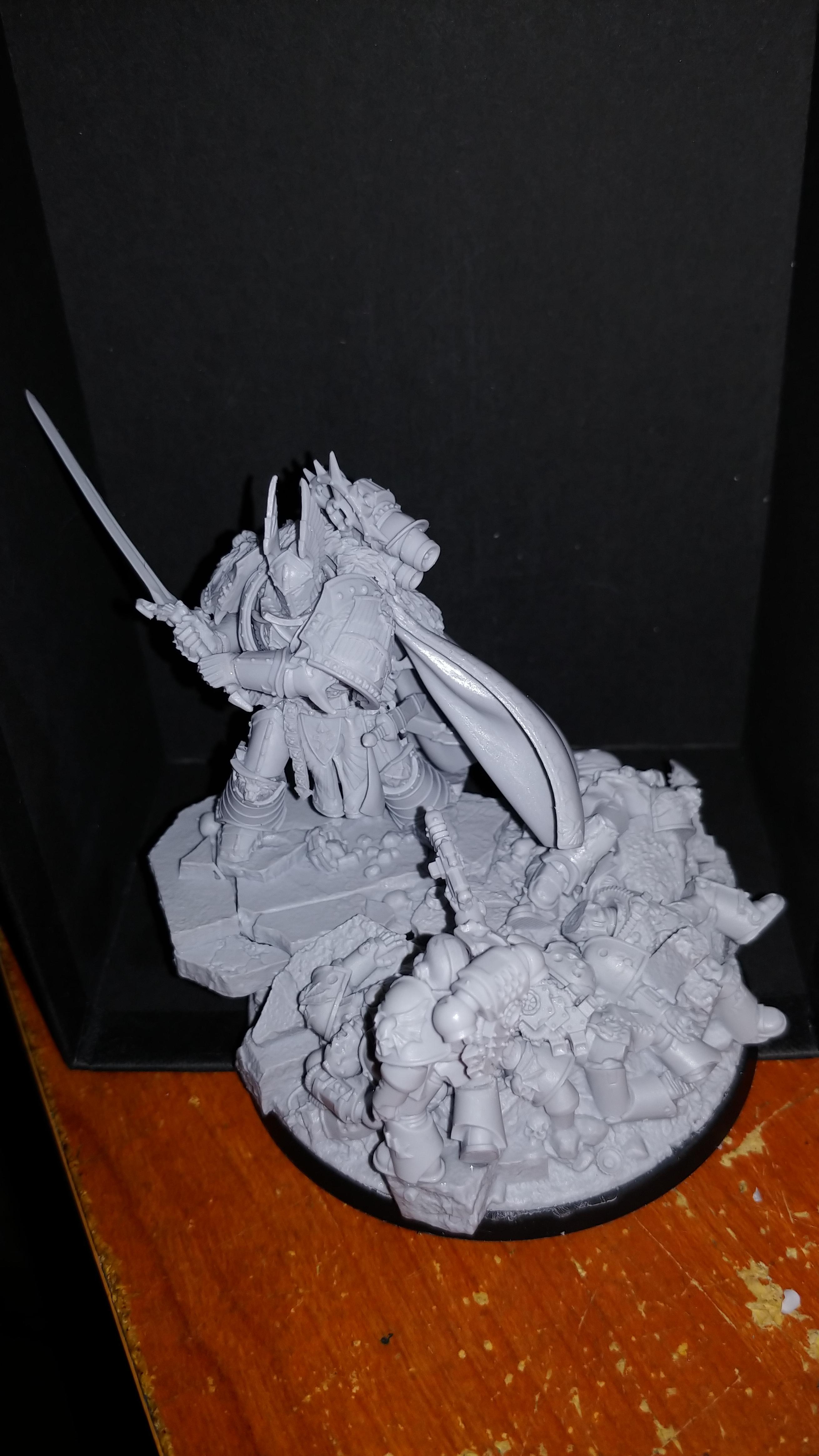 So the Stonemage's head comes in three different pieces.

The face itself is attached to the front of the body.

The horns and the braid are together on a separate piece.

The face plate is a separate piece that goes over the head once the other pieces are joined.
8

1 page of meet the team

6 pages of letters and painted models submitted by readers of White Dwarf.

Designers' Notes - Crusaders & Aliens: 8 pages of the designers that worked on the Indomitus models chatting about their work.

Echoes From the Warp: 4 pages of games developer Robin Cruddace writing about creating the latest edition of Warhammer 40,000.

Battle Report: The Edge of Silence: 18 pages of a battle between the Ultramarines and the Necrons of the Szarekhan Dynasty using the new rules.

AOS Section Introduction: 2 pages to introduce the AOS section of the magazine. One painting, spread across two adjacent pages, depicting the forces of Chaos and Order in a huge melee.

New Rules  Warcry: Chasing the Flames: 8 pages of new rules that enable you to use a Cities of Sigmar warband in your games of Warcry.

Warcry-A Tale of Four Warbands: 10 pages of a Four Warlords style article, but this time with the theme of a Warcry campaign.

Glory Points - Beastgrave: 4 pages of Dave Sanders writing about how to get the best out of Flex warbands.

Realms of Battle  The Mines of Vertigus II: 8 pages detailing how the Vertigus display board was created.

Index Gallery  The Bond Martial: 6 pages of a gallery of Silver Templars painted by the studio and White Dwarf readers.

Inside the Studio: 3 pages detailing what the Design Studio team are currently painting and playing.

Echoes From the Writers: 4 pages of Andy Clark writing about the background for the new 40,000 core book.

Fiction  Bladeguard:  4 pages of a short story written by Callum Davies. Civilians get attacked by Necrons.

The Model Photograph: 6 pages of advice on how to take pictures of your models.

Bad Behavior has blocked 7455 access attempts in the last 7 days.